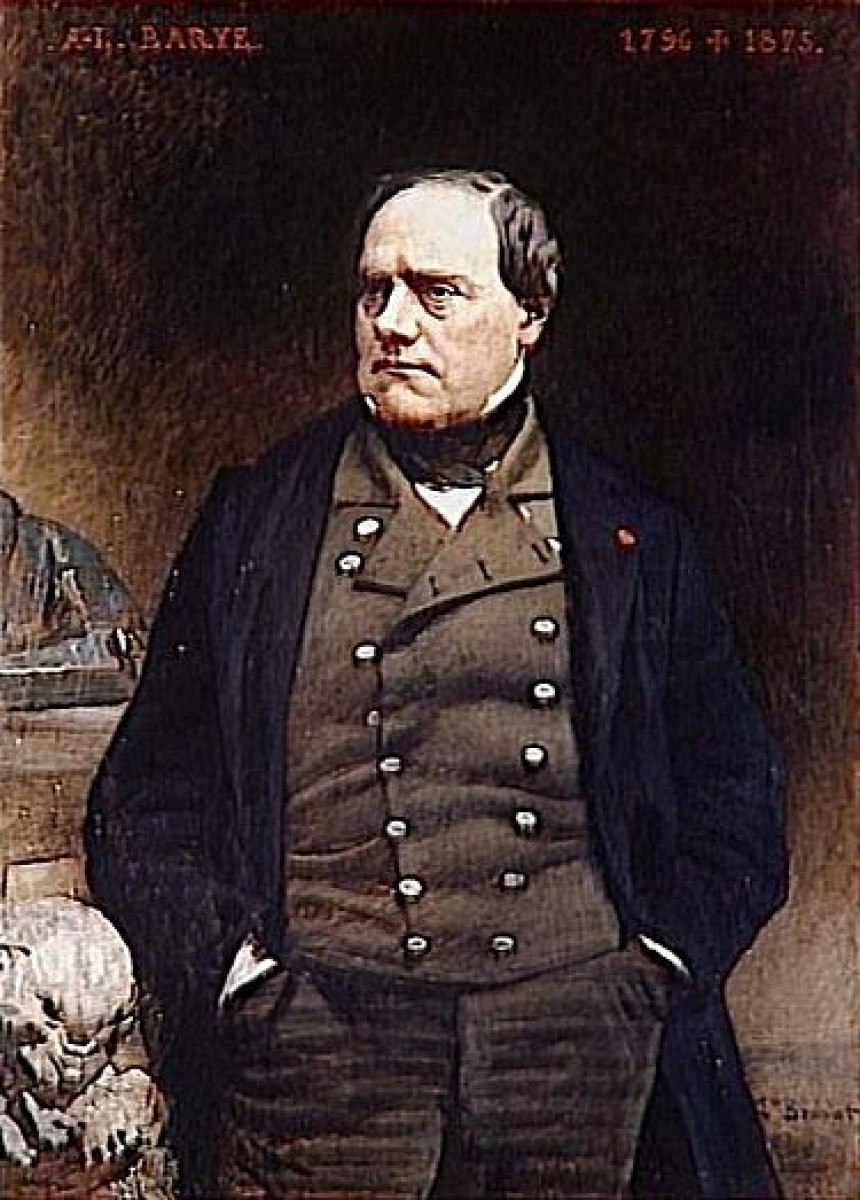 Antoine-Louis Barye (1796-1875) was a French sculptor, renowned for his animal sculptures. His practice of sketching in a natural environment, after the animals in the Jardin des Plantes in Paris, gradually led him to also practice painting. Placed very early with Fourier, a steel engraver who made dies for the metal parts of the Grande Armée uniforms, he learned all the metalworking trades and became an outstanding chiseller. He entered the École des Beaux-Arts in Paris in 1818, where he received a classical training in the workshop of the sculptor François-Joseph Bosio and the painter Antoine-Jean Gros. In 1820, he was awarded the second Prix de Rome for sculpture for his Cain cursed by God. In 1831, Barye became known to the public when he exhibited Tiger Devouring a Gavial at the Salon, a tormented and expressive work that immediately made him the first Romantic sculptor, the alter ego of Eugène Delacroix in painting, and provoked the admiration of the critics. From then on, he never ceased to produce masterpieces, often of small dimensions, which enriched the collections of amateur cabinets on both sides of the Atlantic. In 1833, Barye exhibited his Lion with a Snake at the Salon, a commission from the king for the Tuileries garden, an allegory of the monarchy crushing sedition, three years after the July Revolution.

The critics were enthusiastic, but this was not necessarily the case with his colleagues. In a complete break with the academicists who ruled the Institute at the time, Barye opened a foundry and distributed his work himself, using the modern techniques of his time. Like the Romantic artists of his time, Barye appreciated the exotic and the Middle Ages. He preferred bronze to marble, which he considered too cold. Barye's style became more refined from 1843 onwards. He gave his human figures inspired by Greek models, such as the bronze group of Theseus and the centaur Biénor, an energy and a movement proper to the romantic vision.

Barye's republican ideas did not prevent him from forming a relationship with Ferdinand-Philippe d'Orléans, for whom he executed a table centrepiece, a masterpiece of the decorative arts of the period. He became one of Napoleon III's favourite sculptors, during whose reign he produced monumental works such as La Paix, La Force, La Guerre and L'Ordre for the decoration of the new Louvre palace and an equestrian statue of the emperor for the Louvre's counters. Despite his commercial activity and his practice of art, which baffled the members of the Institute, they finally welcomed him into their ranks in 1868, and the artist enjoyed ease and recognition during the last ten years of his life.