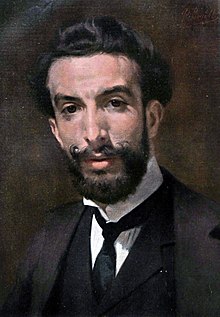 Julio Borrell y Pla was a Catalan painter and decorator who mastered the subjects of history, genre and the portrait. He was trained by his father, the painter Pedro Borrell del Caso. As a decorator, the ornamental works he carried out in the church of San Francisco in Buenos Aires and in the dome of the disappeared church of La Merced in Barcelona are particularly notable. The latter work was carried out on the occasion of the church being given the title of Minor Basilica by Pope Benedict XV (1918). Unfortunately, this work was destroyed on 20 July 1936.On that date, a frenzied mob, accompanied by the public armed forces, entered the church after firing at the façade. They set fire to the church and burned the paintings on canvas in the tomb of Julio Borrell.
He sent his works to exhibitions at home and abroad, receiving an honourable mention at the National Fine Arts Exhibitions of 1895 and 1897, and a third medal at the 1901 edition for a canvas kept in the Prado. He also took part in the 1888 Barcelona World Fair.
He also excelled in pastel painting.