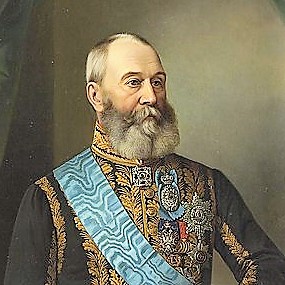 Georg von Bothmann (Russian: Egor Botman) was a German portrait painter at the Imperial Russian Court in St. Petersburg.
For his portrait of Tsar Nicholas I, he received the title of "Imperial Russian Court Painter" and became a member of the Academy of Arts in St. Petersburg. He painted portraits of Russian tsars Nicholas I and Alexander II, as well as members of the nobility, admirals and military officers. His paintings are in the Hermitage, the Naval Museum, and the Russian Museum in St. Petersburg. His grave is located in the Old Annen Cemetery in Dresden.