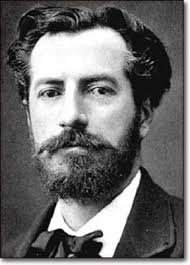 Jean Baptiste Carpeaux is one of the greatest French sculptors of the last century, along with Rude, Dalou and Rodin. At the age of twelve, he was apprenticed to the ceiling artist Debaisieux who, astonished by the young boy's gifts, advised his father to have higher ambitions for the child. In 1842, he joined the Royal and Special School of Drawing and Mathematics, then the Valenciennes School.
After starting in the architecture class, the artist was finally attracted to the sculptor's class. However, his father opposed this vocation, before giving in to the encouragement of Victor Liet, an art lover and family friend. Supported by Viet, Jean-Baptiste Carpeaux began selling small models to bronze editors. These modest earnings helped him to improve his life until the bronze-worker Michel Aaron asked him to work in his workshop. The young artist divided his day between his work and his own creations. He then enrolled at the Ecole des Beaux-Arts in 1844 where he drew from the themes of Antiquity. Inspired by episodes from the Bible, Carpeaux drew and modelled a small bas-relief, "La Coupe de Benjamin", and another, "Joseph recognised by his brothers", which are his first known works.
During his apprenticeship, the artist met Rude, the undisputed master of sculpture. Rude was won over by the young Carpeaux's talent and declared: " Our house is open to you. Come and work here! ". However, to remedy his miserable situation, Carpeaux was forced to return to his trade as a mason. Fortunately, Baron Taylor, General Inspector of Fine Arts, took an interest in the young man's exceptional gifts and tried to help him out of his misery.
The general council of Valenciennes granted the sculptor an annual pension of eight hundred francs. Jean-Baptiste Carpeaux's career was finally launched, and the town of Valenciennes even gave him his first commissions in 1848 and 1849. For the church of Monchy-le-Breux, he created four sculptures representing Saint Gregory, Saint Jerome, Saint Ambrose and Saint Augustine. Then he was commissioned by the M. Foucart to create a bas-relief on the Holy Alliance of Peoples. A merchant also commissioned him to decorate the door of his hotel with wood carvings evoking the four seasons.
On the occasion of a visit by Napoleon III to the north of France, the sculptor exhibited a plaster bas-relief on the surrender of Abd-el-Kader. The emperor noticed this work and commissioned its final execution.
Carpeaux won the Grand Prix de Rome on 9 September 1854 and in the last months of his stay in Rome, he executed a composition on the theme of "Ugolin". This bold work earned him a considerable reputation in Rome and rave reviews in Paris. Carpeaux offered this group to the city of Valenciennes in 1863.
The emperor was once again seduced by the artist's talent and enthusiasm and became his protector. The mason's son was now received at court and married the daughter of the general-governor of the Luxembourg Palace. Jean-Baptiste Carpeaux was welcomed in the most elegant circles, sought after for his wit and admired for his talent.
The artist was commissioned to decorate the new Tuileries Palace and was chosen by Charles Garnier to decorate the façade of the Opera House, which was in the process of being completed. Between 1866 and 1869, Carpeaux multiplied his projects, models and sketches to obtain the desired sensation of movement. Finally "La Danse" was completed, representing a leaping genie, tambourine in hand, in the middle of a round of nymphs dancing around him. After the inauguration of this high relief, the sculptor, faced with financial difficulties, decided to isolate individual subjects and busts to make bronze reductions that he sold to collectors. The "Three Graces", featuring a Bacchante with ivy, a Bacchante with roses and a Bacchante with laurels, was created in 1874. This sculpture expresses all of Carpeaux's art of expressing movement and the grace of the instantaneous.
Carpeaux's works were much appreciated and aroused great admiration, including among Rodin who declared: "We were anxious, my comrade and I, to see the day end so that we could go to the market of the Opéra to shout out our admiration for the masterpiece and for the artist". Rodin considered Jean-Baptiste Carpeaux to be an artist possessed by the same passion for sculpture as himself: "Carpeaux loved his art passionately, he expressed it with the ardour of an essentially impulsive temperament, he had the highest sense of grandeur, supported in this by his admiration for Michelangelo".