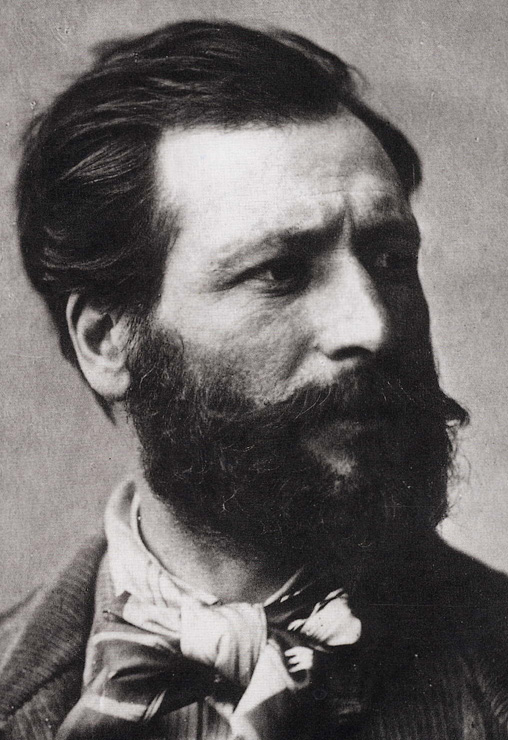 Jean Baptiste Clésinger received his artistic training from his father, Georges-Philippe Clésinger, a sculptor in the academic tradition. The latter took him to Rome for six years, where he became a pupil of the neo-classical Danish sculptor Bertel Thorvaldsen, who had a remaining influence on his work. In 1839, he studied for a short time under David D’Angers before travelling within Europe. In 1843, Clesinger made his debut at the Salon with a marble statue of the Vicomte Jules de Valdahon, subsequently specializing in portrait busts and equestrian statues on a grand scale. At the 1847 Salon, he created a sensation with his Woman Bitten by a Serpent, produced from life-casts from his model Apollonie Sabatier (the pose being particularly suitable for such a method), thus reinforcing the scandal with an erotic dimension. Appolonie Sabatier, the model, was a salonnière and the mistress of Charles Baudelaire and others. The eroticism, the indecency, and the realization based on a live cast were denounced. After strong criticism of his "François 1er à cheval", commissioned by the Louvre but quickly refused, he settled in Rome and then returned to Paris. His reputation changed: his busts of personalities and artists, his allegorical and mythological compositions and his statues of animals were praised. He received the knight's cross of the Légion d'honneur in 1849 and rose to an officer of the order in 1864. At the death of the composer-pianist Frédéric Chopin on 17 October 1849, Clésinger made Chopin's death mask and a cast of his hands. He also sculpted, in 1850, the white marble funerary monument of Euterpe, the muse of music, for Chopin's grave at the Père Lachaise Cemetery, in Paris.

Clesinger’s exquisite marble works were later reduced to a smaller scale to be cast in bronze by Barbedienne or Susse. Strictly speaking Clésinger cannot be called an animalier, although modelling animals was well within his grasp. Such examples include his Young Fawn (1846), Roman Bull (1859) and Combat of Roman Bulls (1864). In 1868 and 1870 he organized public auctions of his own work, taking ownership of his own artistic success. At times, he edited his own work. He also used the Marnyhac foundry in Paris.

Clesinger was, without doubt, an instinctive, sensual sculptor and an outstanding craftsman admired by many, including the poet and critic Charles Baudelaire. He died on 5 January 1883 aged 68

His work had a strong influence on other sculptors, who later gave the female body more reality and closeness to nature.