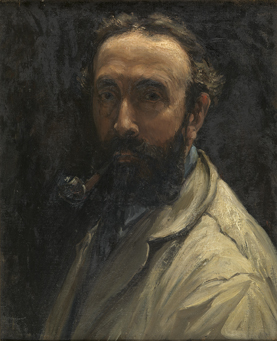 Louis Clesse received his first artistic training from his brother Theo, studio manager in the decoration company of Paul Hermanus in Brussels and an amateur painter himself. Louis Clesse later studied at the Academy of Fine Arts in Ixelles. There he proved to be an excellent student, who won all the prizes. In 1904 he was awarded the Great Government Medal.

He then went to work for the Hermanus company, where he was commissioned to make many copies of paintings by old masters.

In 1907, Clesse took part in the Triennial Salon in Brussels for the first time with a forest view. After that, he was a very regular participant in numerous national and international exhibitions of work by living masters.

He frequently worked in the vicinity of Auderghem, where the woods and ponds continued to inspire him. The region around Beersel and the banks of the Senne also attracted Clesse. In the 1930s he stayed in Oudenburg and started painting the coastal region.

Clesse is especially known as a painter of landscapes and harbour views.

Clesse's style is a successful combination of realism and impressionism, strongly influenced by Emile Claus, Franz Courtens and Isidore Verheyden. It is an art that testifies to a great love of the land, with attention to light, colour, atmosphere and composition.