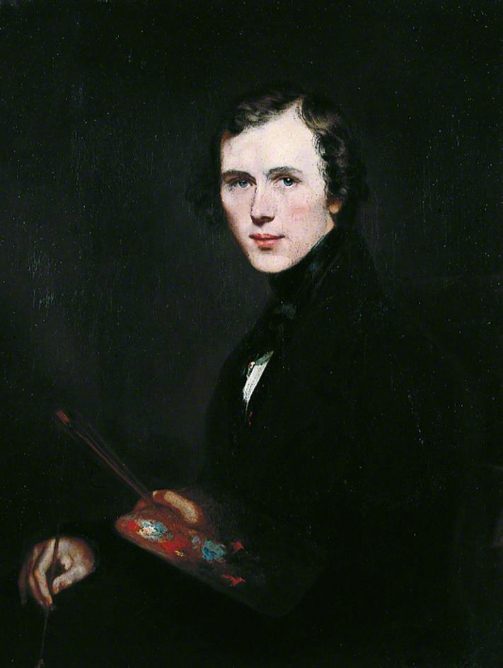 Thomas Sidney Cooper was one of the foremost animal painters of the Victorian period. He was born in Canterbury, Kent, and as a small child he began to show strong artistic inclinations, but the circumstances of his family did not allow him to receive any systematic training. By the time he was twelve years old, he was working in the shop of a coach painter. Later he obtained a job as a scene painter, and he alternated between these two occupations for about eight years. He still felt a strong desire to become an artist, and all his spare moments were spent drawing and painting from nature. At the age of twenty, he went to London, drew for a while in the British Museum, and was admitted as a student of the Royal Academy. Subsequently, he returned to Canterbury, where he was able to earn a living as a drawing master and by the sale of sketches and drawings.

In 1827, he settled in Brussels and married before taking up a position as a teacher in Brussels in 1829. There he befriended Eugène Joseph Verboeckhoven, the great Belgian animal painter, who greatly influenced his style. He was also influenced by the 17th Century Dutch School.  Because of the Belgian Revolution, he returned to London where he settled and first exhibited at Suffolk Street in 1833. He exhibited forty-eight pictures at the British Institution between 1833 and 1863. ‘Landscape and Cattle’, Royal Academy 1833, was shown until 1902 without a break - a record for a continuous exhibit at the Royal Academy. Sheep and cattle were his most frequent subjects, although he did paint a few figurative subjects. Cooper collaborated between 1847 and 1870 with Frederick Richard Lee R.A. on several paintings, Lee undertaking the landscapes, and Cooper adding animals to complete the scene. He was elected an Associate of the Royal Academy (ARA) in 1845 and Royal Academician (RA) on 22 June 1867. After about 1870 Cooper’s commissions were so constant and lucrative that he was tempted to yield to facile repetition of his favourite themes.

He was a great philanthropist in Canterbury, and used some of his wealth to distribute bread and coal to the poor at Christmas. Most notably in 1882 he developed his private art lessons into a full-fledged art school in Canterbury, located at his home and studio in St Peter's Street. Originally called the Canterbury Sidney Cooper School of Art, Cooper's art school is still in existence, although it is now called differently.

The quality and competence of his style began to decline during the late 1890s by which time he was an old man. His studio sale at Christie’s lasted three days from 12 to 15 April 1902.