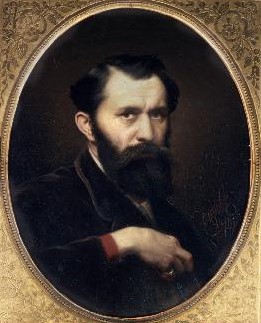 Gustave Léonard de Jonghe was the son of landscape painter Jan Baptiste de Jonghe, who also initiated him into the art of painting. When his father died in 1844, he received a scholarship from his hometown Kortrijk and continued his studies at the Royal Academy of Fine Arts in Brussels, with François-Joseph Navez and Louis Gallait, among others.

In 1848, at the age of 18, he already exhibited in the Brussels Salon. Following Alfred Stevens' example, he emigrated to Paris in 1850 and soon made a name for himself as a popular painter of elegant female and group portraits of the bourgeoisie. From the 1850s onwards, he was to exhibit several times at the Paris Salon. Influenced by Alfred Stevens, he concentrated on portraiture during the 1850s. He painted mainly upper-class women in luxurious settings, with much attention to fashionable clothing, always in an aesthetic realist style that was very popular at the time. Influences are recognizable from Japonism and Orientalism.
He became an outstanding painter of elegant women and family life during the Second Empire. Beautiful women in gorgeous silk fabrics, set in grand interiors, were his recipe for unparalleled success. De Jonghe presented a series of such images throughout his career. In each work, the setting may have been different, but his focus always remained true to the idealized female type. The use of such a grand interior gave him the opportunity to exercise his art of observation and painting with great flair.
Compared to his contemporaries, De Jonghe distinguished himself by his virtuoso talent and his reputation was unchallenged from 1863 onwards.

In 1864, Belgium's King Leopold I awarded him the Order of Leopold. For almost thirty years he traveled ceaselessly between Paris and Brussels, finally settling in Antwerp in 1884. He died there in 1893, at the age of 63.