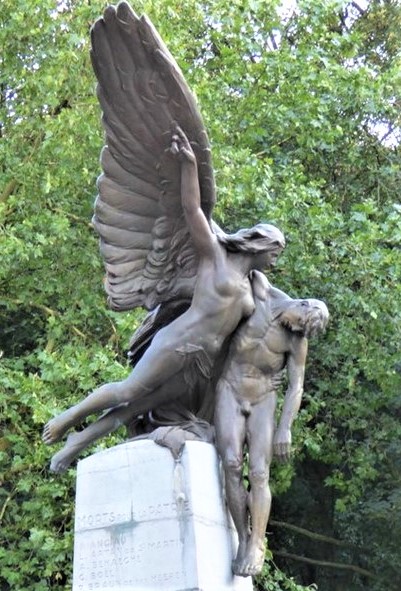 Pierre de Soete was put to work at the age of eight. He was orphaned at the age of fourteen. He enrolled at the Molenbeek Academy of Drawing and taught himself to model clay. He did "a thousand jobs" before finding himself in the polishing workshop of the Compagnie des Bronzes in Brussels (1900). "Promoted to the fitters' workshop, he saw sculptures by Julien Dillens, Constantin Meunier and Jef Lambeaux pass through his hands.
A skilled and observant self-taught man, he wanted to become a sculptor, with the help of a brief introduction to drawing at the Molenbeek Academy. In 1911, a bronze foundry in Anderlecht entrusted him with the management of one of its departments.
But neither his new position nor the Great War distracted him from his passion for sculpture. After the Great War, he was asked to create monuments to the victims of the world conflict, and from 1924 onwards he devoted himself exclusively to sculpture; two years later, the monument to the heroes of the Air Force in 1914-18 was his first major achievement. From then on, he responded to official commissions (busts, medals, portraits), while continuing his personal work made up of small-scale works of very varied inspiration, sometimes highly original, in a very classical style.
Signatory of some monumental public works reminiscent of the official statuary of the authoritarian regimes of the 1930s, he claimed not to belong to any school or cenacle, and to have only his personal conception as a guide. He excelled in subjects such as motherhood, sport and dance. He was the creator of effigies for the automobile industry and the famous radiator cap for Minerva cars.
He was also known as an athlete. As such, he travelled to the United States in 1927 for the Gordon Bennett Cup Competition and was a finalist in the 1928 Olympic Art Competition in Amsterdam.