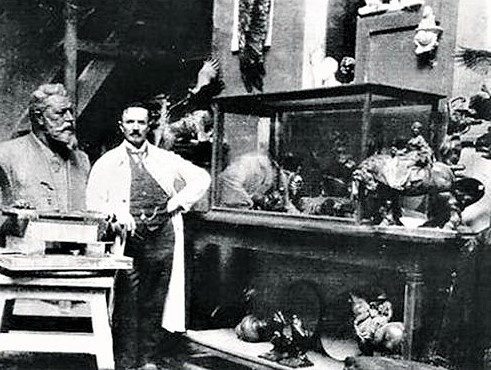 Josuë Dupon (also Josué or Josue Dupon) was a Flemish sculptor and engraver. His work also includes painting and graphics.

He received his training through evening classes at the academy of Roeselare and Antwerp (1884) and later at the National Institute of Fine Arts (1887). In 1891, he won a gold medal with the monumental sculpture group Samson kills the lion and was runner-up in the Prix de Rome for sculpture. From that year on, his work appeared regularly in exhibitions at home and abroad. His reputation was such, that he became one of a select group of sculptors allowed by King Leopold II to carve statues in Ivory, which was imported from the Congo, the Belgian colony. In 1893 his exceptionally refined ivory statue of Diana was bought by the Antwerp Royal Museum of Fine Arts, which also acquired his spectacular bronze Vulture defending its prey a year later.

Working in every genre and mastering every technique and material, Josuë Dupon became best known as a sculptor of exotic animals. He was equally capable of faithfully expressing anatomical detail as of rendering the animals' nature. Josuë Dupon was a technically faultless realist, with a  sense of the dramatic, a feeling for decorative complexity and a tendency towards idealizing. The placement of his camel driver and two bronze groups at the entrance to Antwerp Zoo confirmed this reputation as animalier.

The career that Dupon subsequently built, brought him numerous important awards and an appointment as professor at the Antwerp Academy, a tenure he held between 1905 and 1934. Besides animals, he sculpted busts, war memorials and public monuments.  For one of the largest sculptural monuments and the largest fountain in the city of Buenos Aires, called Monument of the Two Congresses, he collaborated with his good friend, the Belgian sculptor Jules Lagae. Josuë Dupon created several statues of mighty condors for this monument.

At the start of his career his conception of art was strongly influenced by traditional 19th century artistic ideals. After the turn of the century his compositions and surface treatment changed and became more modern. He met Rembrandt Bugatti around 1905 or 1906 in the 'Jardin des Plantes' in Paris and invited him to Antwerp. Bugatti began travelling to Antwerp in 1906 to observe and sculpt the inhabitants of its zoo, which was then considered the best in the world, and Dupon allowed Bugatti to stay with him during several of his early visits. As such Dupon became a friend and a bit of a father figure to Rembrandt Bugatti.

Dupon did not play a very active part in artistic movements or associations. Dupon remains an important sculptor not only through his body of work but also because of the influence he exercised through interactions and collaboration with other sculptors such as Lagae, Bugatti and Bourdelle but also because he trained leading sculptors such as Albéric Collin (1886-1962), Willy Kreitz (1903-1982) and Albert Poels (1903-1984).