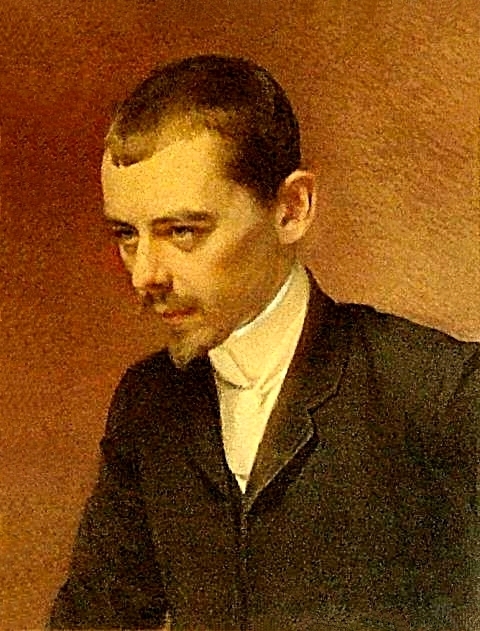 Ivan Ivanovich Yendogurov (Russian: Иван Иванович Ендогуров); was a Russian landscape painter and watercolorist; associated with the Peredvizhniki ( group of Russian realist artists who formed an artists' cooperative in protest of academic restrictions). His younger brother, Sergey was also a well-known artist.

His father, Ivan Yendogurov (1812-1871) was an Admiral in the Imperial Russian Navy. His mother was the daughter of Admiral Fyodor Yuriev. While attending the gymnasium, he and his brother (Sergey) became acquainted with the landscape painter, Yefim Volkov, and decided to make art their career.

After graduating in 1880, he began studying law at Saint Petersburg State University, but continued to take lessons from Volkov. In 1884, he left the University to follow classes at the Imperial Academy of Arts. His first exhibit came the following year, and he was awarded a major silver medal in 1890.

From 1885 through the early 1890s, he exhibited prolifically, at the Imperial Society for the Encouragement of the Arts, as well as with the Peredvizhniki; participating also in the Exposition Universelle in Paris (1889)  and was awarded a silver medal, the International exhibition in Berlin (1891) and the World's Columbian Exposition held in Chicago (1893).

At the end of the 1880s, he developed the first symptoms of tuberculosis and due to illness spent most of his time in the Crimea, Ukraine, and the Caucasus. From 1890 to 1893, he lived in Italy, then spent a short time in southern France (1893). After a stay at a spa in Bavaria, he lived in Crimea from 1894 to 1895. Most of his paintings from there appear to be lost. He travelled to Norway (both in 1890 & 1895). Later, he returned to Italy and died of his illness on the island of Capri.

Toward the end of 1898, the Imperial Academy held a joint retrospective for three artists who had died that year: Yendogurov, Nikolai Yaroshenko and Ivan Shishkin. The following year, his mother endowed a fund at the Academy to establish the "Yendogurov Prize" for landscape painting, which was awarded until 1917

As Ivan Endogourov only lived until the age of 37, his works are fairly rare. Consequently, the return of a Moonlit Night in Ajaccio in Winter to the Russian State Museum in 2000, (believed to have been lost after WWII), was a very special event. Endogourov was one of the great artists in the history of Russian landscape painting, and representations of still waters were an important theme in his works.