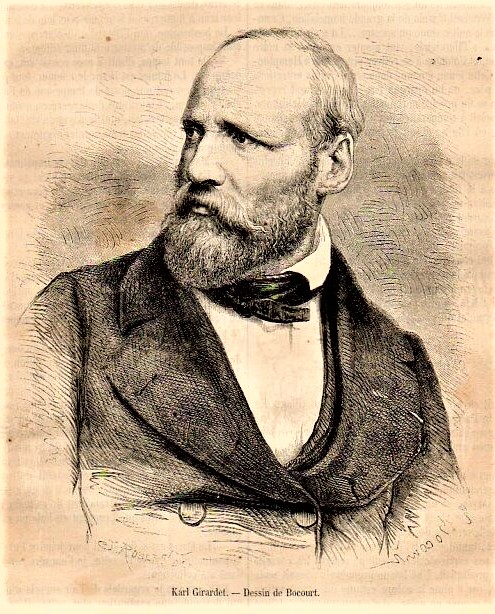 Karl Girardet was born in 1813 in Le Locle, which at the time was part of France but is now part of Switzerland. Girardet lived and worked most of his life in Paris. After beginning his career as a painter of landscapes, he became a well-known history painter. As a confidant of the French king Louis Philippe I, he was also an official court painter.

After 1822, he lived in Paris, where he trained as a painter with Louis Hersent and Léon Cogniet. In 1836, he presented his first works in the Salon of Paris and started working as a copyist for the French royal court.

An alpine landscape presented at the 1837 Salon obtained him a first distinction, and he successfully collaborated with Cogniet on two great battle scenes exhibited at Versailles.

In 1839, Girardet illustrated his first book, Roland furieux, followed by Jardin des plantes by Boitard in 1842. After a six-month stay in Egypt, 1844, he continued illustrating works and completed several royal commissions for paintings of state occasions.

Drafted into the National Guard, Girardet witnessed the fall of the monarchy in July 1848 and fled to Brienz, Switzerland, where he painted landscapes. In 1850, he returned to France

In 1857, he moved his studio to the Montmartre quarter, where he would live until his death, and was admitted as a member of the Royal Academy of Amsterdam. In 1870, caught in a besieged Paris during the Prussian invasion of France, Girardet damaged his eyesight while sketching the Prussian positions. Seized by anguish, fearing blindness, he died, alone in his flat, of suffocation. He was unmarried, but had lived many years with the painter, Augustine Angelina Kaas, for whom he had provided a pension.

Girardet's art belongs to the tradition of Romanticism and to the popular movement in landscape painting called the "School of 1830". His landscapes, based on sketches often completed under adverse weather conditions and within one hour, exhibit a rare vivacity and mastery of subtle color, especially after his 1850 stay in Brienz. He was not enchanted by the snow-capped peaks of the Alps, preferring instead to portray lakes, streams and marshes, notably the rivers Aar, Eure and Marne.[2]

Girardet sought official recognition through his historical paintings. Later in his life, deprived of royal patronage by the political upheavals in France, his historical paintings met with little success, and he shifted his attention back to landscape painting, which he continued to exhibit in the Salon until the end of his life.

As a man of modest means, Girardet had little leisure to devote to his art and was compelled to earn money mainly as an illustrator. After 1855, he abandoned the Orientalist themes that had contributed to his success; and in his late period, as a diligent craftsman, he dedicated himself to the themes and formats in vogue with his bourgeois clients.

Girardet's success inspired many other French-speaking Swiss artists, and it helped Swiss art and Swiss landscapes gain recognition with a broad international public. Several of his works are exhibited in the Musée d'art et d'histoire of Neuchâtel and in the Musée national de Versailles.