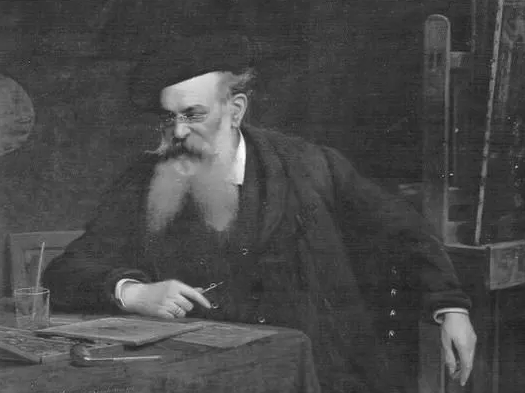 A student of Julien Potier at the Valenciennes academic schools, the painter Auguste Moreau-Deschanvres (1838-1913) lived in the house-studio he had built for himself in Saint-Saulve, where he devoted himself to photography with his daughters, sometimes reconstructing delicious tableaux vivants. Essentially devoted to portraits and genre scenes - more rarely to religious painting - his career was punctuated by submissions to the Salons, mostly in the north, but also in Paris.
Moreau-Deschanvres was especially responsible for several portraits of Jean-Baptiste Carpeaux. The first, dated 1873, was probably made from a photograph and shows a sick and ageing Carpeaux against a dark background. The second, a grisaille medallion, was painted to decorate "the catafalque of the chapelle ardente erected under the porch of the Acacémies in Valenciennes on 29 November 1875. It was deposited in 1924 in the Musée des Beaux-Arts of the city of Valenciennes. The third, and most important, was probably inspired by the photograph published in the "Galerie contemporaine littéraire et artistique". Moreau-Deschanvres had offered to paint a portrait of the deceased sculptor for the historical gallery of the Fine Arts section of the Valenciennes Agricultural Society. In 1876, Moreau-Deschanvres sent his Carpeaux in his studio to the Paris Salon. With his face supported by a hand, in a melancholic posture, the sculptor contemplates us with a feverish look while two of his emblematic works are looming behind him: the Child with a Shell and The city of Valenciennes defending the fatherland, destined for the pediment of the town hall. This large portrait is now in the collections of the Musée des Beaux-Arts.