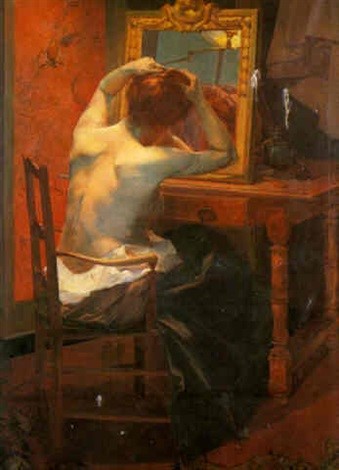 Léon Olivié was a French painter of portraits, genre scenes and history.
He should not be confused with his namesake Léon Olivie-Bon (1863-1901).

A student of Léon Cogniet and Louis-Eugène Cœdès, he made his debut at the Paris Salon in 1859. The painter made several portraits, after Franz Xaver Winterhalter, of Emperor Napoleon III and Empress Eugènie.
In 1870, the critic Camille Lemonnier noted that the painter had not read Shakespeare to paint his Falstaff presented at the Salon and "that his painting, a bit runny, has finesse and no vigour. "
He married the daughter of Mr Frébourg-Fauvel, a shipowner in Fécamp, and settled with his wife Marie Frébourg in Étretat in 1880.
Léon Olivié painted the picturesque life of children and fishermen in Etretat.

His work can be found in several museums in France.