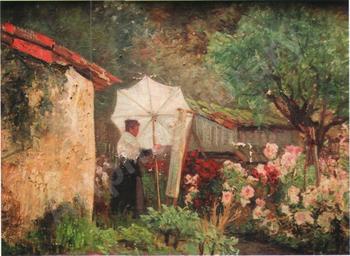 French painter, student of Louis-Augustin Auguin and Pradelles.
Painter of landscapes and seascapes, he is part of this line of landscape painters from Bordeaux who were influenced by Corot and Courbet.
He made his debut at the Paris Salon in 1877, received an honourable mention in 1884, and was awarded a bronze medal at the Paris Universal Exhibition in 1889 with "Étang de
Biscarosse" and a second class medal in 1899. He also exhibited in Saint Louis (1904)
The Gironde, Antibes, Juan-les-Pins, the Dordogne were his favourite subjects.