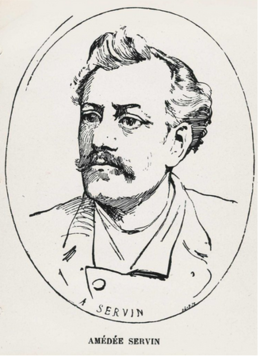 Servin Amédée-Élie was a French painter and engraver, founder of the artistic community of Villiers-sur-Morin.

Servin was born to a tanner, who, disappointed by his son's failure in his studies, apprenticed him to an upholsterer where he learned to draw cartoons. He then entered the École des Beaux-Arts and studied under the painter Michel Martin Drolling. At this school, he befriended students of his generation, such as Jean-Jacques Henner, Benjamin Ulmann and Paul Baudry.
He made his debut at the Paris Salon in 1850, presenting a courtyard interior; thereafter, he exhibited regularly. In 1855, he exhibited three landscape paintings inspired by Normandy and the following year, he was inspired by landscapes of Brittany. He was in contact with the first generation of painters who frequented Barbizon, where he met Théodore Rousseau and Jean-François Millet.
Around 1857, he settled in Villiers-sur-Morin, and in 1860, he founded the "artistic circle of Villiers", and persuaded other artists and writers to come to this village. He began to produce landscapes inspired by this Seine-et-Marne village, where he remained until his death.
In 1872, he received a medal at the Salon, one year after losing his wife. His widowhood made him sad, his production decreased.
His friend Alexandre Falguière sculpted a bust of him for a monument erected in his honour in Villiers in 1888. Servin was nicknamed the "master of the Morin valley". Bénézit cites Servin as an artist of great sincerity, without commercial preoccupation, whose works deserve to be sought after by collectors.