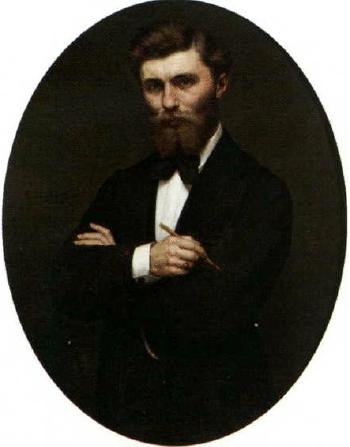 A Belgian painter, who trained at the Academy of Fine Arts in Antwerp under the direction of Nicaise de Keyser.
He painted historical pieces, religious subjects, many portraits and genre pieces in a post-Romantic style. He worked in a very detailed and supple manner, using dark shades.
In 1873, he won second place in the coveted Prix de Rome. From 1874, he exhibited regularly and successfully at the major Belgian salons. He was also appointed official court painter.
In 1883, he became a teacher at the Academy of Antwerp for the drawing class "Drawing live figures ". He is described as a pedantic person and a drill sergeant, someone who strived for perfection. It was because of this that he clashed with Vincent van Gogh in 1886. A clash with Van Gogh's restless nature and feverish working method were indeed inevitable. Van Gogh drew a plaster cast of a Greek goddess as a sturdily built nude Flemish matron, to the disgust of his teacher. Van Gogh, in the presence of the students, called not his method of drawing but Siberdts' methods totally wrong. This led to his expulsion from the class. But this should not be over-emphasised, for, in his last letter from Antwerp to his brother Theo, Vincent even mentioned a compliment from his teacher.
This was not the only incident involving artists who would later achieve great fame: in 1896 Eugeen Van Mieghem was expelled from the academy for refusing to conform to academic teaching.
Eugène Siberdt died on June 1, 1931 in Antwerp.
His works are mainly in private hands, but also in museums in Antwerp and Bruges.
Source Wikipedia