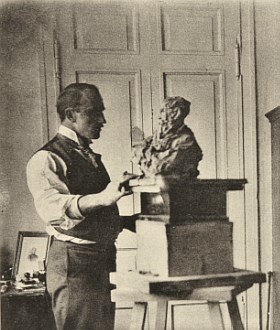 Paolo Troubetzkoy is one of the brightest sculptors- impressionists, whose innovative approach determined the aesthetics and artistic language of sculpture in the early 20th century.
The future sculptor, the son of the Russian Prince Peter Troubetzkoy and American opera singer Ada Winans, was born in 1866, in Italy, in the village of Intra near the Lake Maggiore. He lived in Italy, Russia, France and the United States, traveled to England, Finland and other countries, deriving ideas and inspirations from everywhere.
Giuseppe Grandi wielded the major influence on Troubetzkoy. Paolo was admitted at his studio in 1884.
In 1897, Troubetzkoy was invited to Russia to take a position of the secondary tutor in the sculptural class at the Moscow School of Arts, Sculpture and Architecture. He was officially listed there until 1906. The artists' presence was compared to a breath of fresh air. Troubetzkoy acquainted young Moscow sculptors with his innovative impressionism technique. In those years, Troubetzkoy became the sculptor that, according to the words of Auguste Rodin, pioneered “the Russian triumph” in the world. In 1900, Troubetzkoy exhibited his sculpture at the Exposition Universelle of 1900 and shared the Grand Prix with Rodin.
In 1906, Troubetzkoy moved to Paris, and in 1914, at the invitation of the American collector, he left for the USA for several months, but due to the World War I, he remained there until 1921. Troubetzkoy became thus a sought-after sculptor in the USA as well as in Europe. In 1921, the sculptor returned to Paris.
In 1932 the sculptor returned to the Italian Pallanza, to Villa Cabianca. During the last years of the sculptor’s life, his personal exhibitions were held in Milan and Bergamo, Egypt and Spain.
Occasionally Troubetzkoy practised painting, pastels and watercolours. He was a member of the Accademia di Belle Arti Milano, member of The Salon d'Automne in Paris.
Today, Paul Troubetzkoy remains best known for his portraits of the beau monde of the first half of the 20th century. His sculptures of kings, tsars, presidents, aristocrats, bankers, fashionable figures, artists and writers, including Tolstoy and George Bernard Shaw, who called him the most astonishing sculptor of modern times, were compared at the time to the painted portraits of Giovanni Boldini and John Singer Sargent.
Despite the rapid modelling and impasto-like surface, which gave his sculptures an airy and ephemeral character, they still exuded elegance and refinement. His numerous animal sculptures bear witness to the same virtuosity.