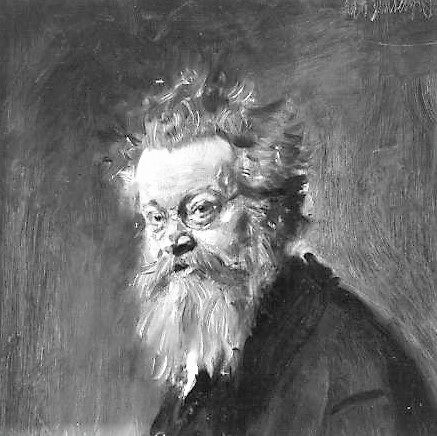 The painter Josef Wenglein is considered one of the last great landscape painters of the Munich School of the 19th century. His works can be found in several museums and galleries in Germany and Poland (Bamberg, Berlin, Cologne, Dresden, Frankfurt, Leipzig, Mainz, Munich, Münster, Schwerin, Wiesbaden, Wroclaw, Wuppertal, Würzburg)
Wenglein was born in Munich in 1845. While studying law at the Ludwig-Maximilian University in Munich, Wenglein was already pursuing his artistic training at the Academy of Fine Arts.
Later, Wenglein turned completely to art and in 1866 he was accepted as a student in the studio of the landscape painter Johann Gottfried Steffan. His most formative teacher, however, was the painter Adolf Heinrich Lier, whose painting school Wenglein attended for three years and to whom he paid tribute in 1868 with his painting Adolf Lier Painting at the Kalter (Neue Pinakothek, Munich). Later, Joseph Wenglein himself became a professor at the Academy of Fine Arts in Munich.
Lier came into contact with the painters of the Barbizon School in France and also familiarised his pupil Wenglein with their plein air painting. Like his master, Josef Wenglein was inspired by the motifs of his surroundings and painted the regions of the Isar at different times of the day and year. The vast landscape of the Dachauer Moos, Nymphenburg Castle still in the fog, or The limestone pickers in the Isar riverbed near Tölz are just a few examples of Wenglein's sensitivity and his taste for the atmosphere of a place, which he was able to reproduce with atmospheric colours and effective contrasts.
Josef Wenglein died in Bad Tölz in 1919. Among his pupils in Munich was the impressionist Otto Reiniger.