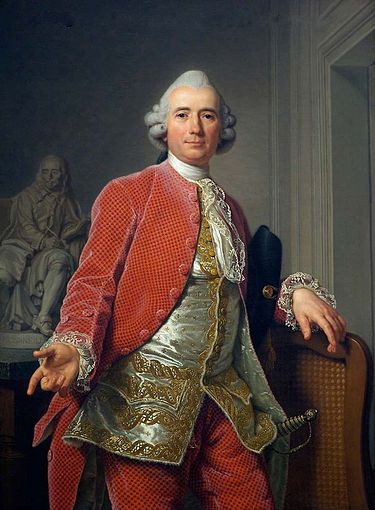 Caffieri was born in Paris. Belonging to the third generation of a family of sculptors and bronzeworkers from Italy, who had moved to France during cardinal Mazarin's regency, he was the son of Jacques Caffieri and the younger brother of bronzeworker Philippe Caffieri. He was a student of Jean-Baptiste Lemoyne. Jean-Jacques won the Prix de Rome in 1748 and spent four years (from 1749 to 1753) at the Villa Medici in Rome studying ancient art. While in Rome he also was inspired by the art of Bernini.
When he returned to Paris, he became sculptor to Louis XV and provided ornamental designs for metalwork, notably for the staircase at the Palais-Royal.
He joined the Académie Royale de Peinture et de Sculpture in France in 1757. To gain acceptance at the Academy in 1757 (July 30), Caffieri had presented a plaster figure of a river, which he exhibited at the salon the same year. The river is represented by a naked old man, sitting on an urn from which the water is flowing. The left hand relies on an oar, the right takes the edge of urn. The crowned head is turned to the right.
Jean-Jacques Caffieri showed great ease of execution: less than two years after the approval of the plaster model, he presented the marble as his reception piece on April 28, 1759. This marble can still be seen in the gallery of reception pieces in the Louvre.
He made his name, however, with a series of portrait busts of contemporaries like Madame du Barry, Pierre Corneille, Thomas Corneille, Philippe Quinault, Jean de la Fontaine and Jean-Philippe Rameau and famous dramatists of the past. For donating busts of actors and playwrights to the French national theater, the Comédie Française, Jean-Jacques Caffieri, an avid theatergoer, gained free entry for life. His habit of making casts from his marble sculptures and giving them to institutions was fortuitous, for many of Caffieri's marbles were lost in a fire in 1761.
Caffieri insisted on absolute fidelity to the model's features, and his talent lay in making these features come alive. He captured the kindness of astronomer Canon Pingre as well as the fierce countenance of Doctor Borie. French philosopher and art critic Denis Diderot declared Caffieri's Doctor Borie "a good enough likeness to make a patient die of fear."
His students included Jean-Joseph Foucou.