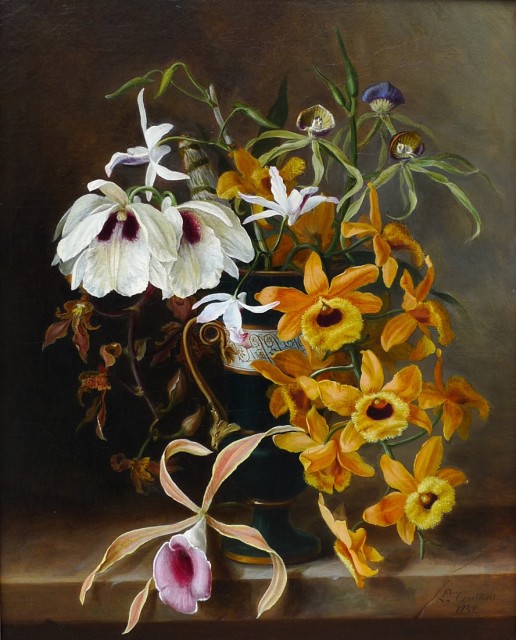 Louis-Aristide-Léon Constans was a 19th-century French painter, best known for his delicate flower paintings. He exhibited at the Paris Salon between 1836 and 1848. Two paintings of flowers on vellum are now in the Natural History Museum in Paris.

It was in the midst of these controversies that the painter Louis Aristide Léon Constans, his wife and their children lived. The painter, who liked to represent flowers and still lives, produced paintings which he exhibited from 1836 and which are still highly rated in the 21st century.

In 1853 he was hired by the Manufacture de Sèvres to paint flowers on porcelain. He settled in Sèvres, in the Paris suburbs, on the left bank of the Seine, with his wife and two daughters, also painters. Louis-Aristide-Léon Constans and his wife took in two of the forty or so Iranian students sent from Persia to France to perfect their knowledge of industrial techniques and processes, as recommended by the ambassador Farrokh Ghaffari on his return to Persia in 1858. The two students in question, Hedayat Oulla Khan Ghaffary and Cheykh Mohammed Naghi Aga - their names are so transcribed in French documents of the time - were assigned to the Manufacture de Sèvres. On 14 August 1862 they married the two artist sisters, Berthe and Elisa Léonie Constans.