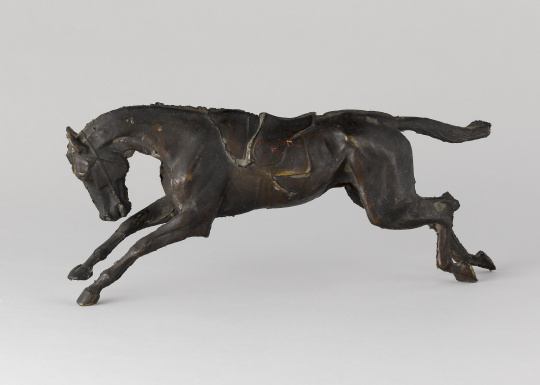 Joseph Cuvelier, born on 3 December 1833 in Comines and died on 21 October 1870 in La Malmaison (Aisne), during the French Prussian war, was a French sculptor. Joseph Cuvelier was an animalier sculptor. He was Edgar Degas’ great friend from the 1860s. Cuvelier caught Degas attention as a young aspiring innovative equestrian sculptor. Cuvelier had created a statue of a galloping horse (now in the collection of the Musée d’Orsay). Degas felt inspired by the way Cuvelier had managed to captivate the movement of the horse. Degas asked Louis-Alfred-Joseph Cuvelier to teach him the art of building wax models. Cuvelier exhibited at the Salon from 1868 to 1870. He died during the 1870 war, a member of the tirailleurs de la Seine, he was killed on his way out of Malmaison.
Proof that Cuvelier, full of innovation and promise, was a source of inspiration to Degas and indeed a good friend: When Cuvelier was killed in the war, Berthe Morisot’s mother wrote to another daughter, Yves: “Monsieur Degas was so affected by the death of one of his friends, the sculptor Cuvelier, that for some time he was impossible. He and Manet almost came to blows arguing over the methods of defence and the use of the National Guard, though each of them was ready to die to save the country.”