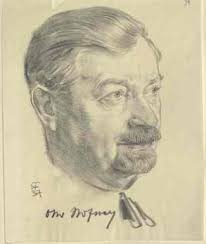 Hofner was an Austrian sculptor and medallion maker.

Otto Hofner served a four-year apprenticeship as a goldsmith, engraver and chiseller. From 1898 he attended the School of Applied Arts under Stefan Schwartz. Study trips took him to Paris, Holland, Belgium and London.

From 1904 to 1915 he worked as a teacher at the cooperative school for gold- and silversmiths in Vienna. Besides working as an independent artist, he deepened his knowledge of modern sculpture by travelling to Paris and London. From 1909 onwards he was a member of the Künstlerhaus. Beside his goldsmith's work, Hofner created funerary monuments, busts and portrait reliefs as well as medals, plaques and sculptures. He created furthermore work for public spaces and municipal housing during the Red Vienna “Rotes Wien”period. This was the nickname of the capital of Austria between 1918 and 1934, when the Social Democrats had the majority and the city was democratically governed for the first time in its history.

After his death Otto Hofner was buried in a grave of honour in the Hietzing cemetery.