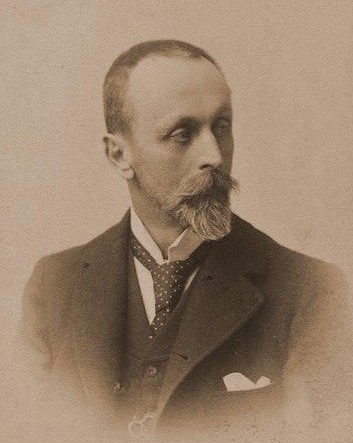 Julien Renevier showed an early talent for drawing.
Nevertheless, he studied theology at the Lausanne Academy. As a brilliant student, he decided to continue his theological education in Berlin.
In 1872 Julien Renevier interrupted his studies at the Berlin Academy to devote himself fully to painting. He entered the studio of Carl Steffeck, a well-known animal painter. He then completed his training in Munich, where he attended the classes of Carl Theodor von Piloty for four years. Renevier acquired a taste for history painting and the portrait genre. He immersed himself in the realistic style of the Munich School.

Through the patron Theodor Beck, two paintings by Renevier, "Woman with a Strawberry" and "Dante in the Convent composing the Divine Comedy", enter the collections of the Kunstmuseum in St. Gallen.
Renevier left Munich in 1878 and went to Italy. He was 31 years old. After visiting Venice, he settled in Rome. He stayed there for eleven years, punctuated by trips to Europe and stays in Switzerland. At the heart of Roman artistic life, Renevier rubbed shoulders with many painters. Exhilarated by the intense light and colour of the landscapes, he travelled throughout Italy, depicting the countryside, the tourist sites and the deserted corners. Very attached to Italy, Renevier did not forget his native country and sent paintings to the Swiss Fine Arts Exhibition almost every year. He also participated in the Paris Salons in 1883 and 1884 as well as in the Universal Exhibition of 1889, where his "Saint Francis of Assisi Preaching to the Birds" received an honourable medal.

In 1889 the painter gave up his Roman studio and moved to Lausanne to take care of his sick mother. He continued to paint oil canvases, several of which were acquired by museums. In the 1890s, Renevier developed a predilection for watercolour and pastel drawings.
In 1900, he received a mention at the Universal Exhibition in Paris. Until his death, the artist continued to see his work recognized and admired, notably at the National Fine Arts Exhibition held in Lausanne in 1904. He also continued to travel regularly, to Italy, France and Germany.