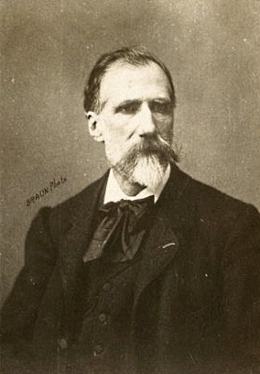 Yes, Mr. Benner is brave and energetic, his works show movement, life, strength; He is a born-painter and one with great breeding…
-Théodore Veron-, Le Salon de 1876

Benner was born on March 28, 1836 in Mulhouse, in the Alsace region of eastern France. Born into a family of artists, he was the twin brother of Emmanuel Benner, also a painter, whose portrait he painted. Jean began his artistic training with his father, also named Jean Benner, an artist of Swiss origin who was influenced by the Dutch masters and who worked most exclusively with drawings and paintings of flowers. After beginning his training under his father, Jean studied for a short time with Jean Eck, attending evening sessions at the atelier Suisse which was not so much a tutorial atelier as an open space providing a model for a young artist to study. Many other artists frequented this atelier, such as Gustave Courbet. Jean Benner continued to train in Paris where he became a student of Ernest Hébert and Léon Bonnat. Some time later, Benner sought a more rigid, academic training and thus enrolled in the École des Beaux-Arts studios of Isidore Pils and Jean-Jacques Henner, two artists who had gained prominence in the Parisian art world. Pils was also a Prix de Rome recipient and spent 1839-1844 in Italy, perhaps providing inspiration to Benner for his future travels. During the Second Empire Pils became a favourite of important members of the Second Empire, ties that undoubtedly carried over to artists who studied with him. Jean and his twin brother Emmanuel followed a very similar course in their study, each studying with their father, then with Jean Eck, and culminating at the École des Beaux-Arts.
The two artist brothers both began working in the academic style which was being challenged by progressive artists, but which was still prevalent and respected by Salon juries and the public during this period. Their treatment of mythological scenes especially spoke to artists and the public of an older generation who sought to maintain art for the upper echelons of society, and away from the lower classes who would not necessarily understand the stories or the depictions.
In 1866, he was seduced by the island of Capri, then married the daughter of his host, Margherita Pagano. Until the end of his life he made frequent visits to the island, which became a major source of inspiration for him. Fittingly, Benner became interested in depicting idealized mythological subjects in the grand manner of the academic tradition.

Benner began his public career at the Salon in 1859 where he exhibited Fleurs (Flowers). His early work shows Benner’s interest in still-lifes and portraits, but he should be mostly remembered for his views of Italy, especially that of the island Capri.

Presumably between 1867 and 1868 Benner set up residence in Capri, though still maintaining lodging with his brother, Emmanuel, in Paris. In 1869, he had returned to Paris and exhibited again at the Salon but from 1870 to 1877 he divided his time between Capri and Paris.

Benner continued to submit his work regularly to the Salon, almost each exhibition inspired at least in part by his voyages in Italy. In 1879, he became “hors concours” which provided him entry into the Salon without the necessity of jury acceptance. He was named a Chevalier de la Légion d’Honneur in 1894 and also became a member of the Société des Artistes Français.
By the time of his death in 1909, Jean Benner had established himself as a serious academic painter who contributed regularly to the Salons.

The largest portion of Benner’s work can now be found in the Mulhouse Musée des Beaux Arts, as well as the Musée d’Art et d’Histoire in Belfort.