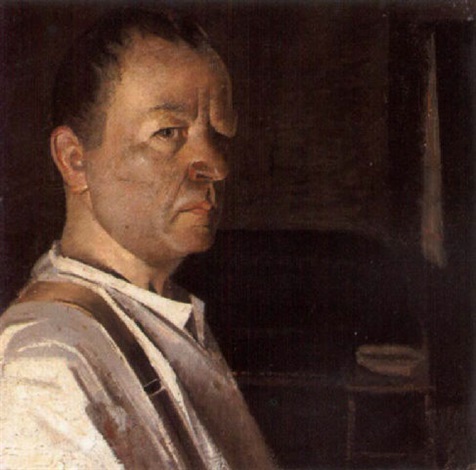 Søeborg was a Danish painter and the son of the manufacturer Jens Christian Søeborg and Martha Severine Schouborg. Søeborg first trained as a house painter, but changed direction and studied art at Sophus and Gustav Vermehrens drawing school and then at the Royal Danish Academy of Fine Arts in Copenhagen (1898-1900). He was taught by Laurits Tuxen at the art school and in the studio of Peter Alfred Schous. He lived in Sweden from 1912 to 1932 and made several trips to places such as Lapland, Ångermanland, Jämtland, Dalarna, Värmland and Småland, where he lived for a time in Växjö. During a visit to Näsåker in the 1920s he became very interested in the 4000-year-old rock carvings and was inspired by them to make a similar monument in the forest a few kilometres from Näsåker. This carving shows a horse pulling a cart with two wheels. He had several individual exhibitions at the Kunstforeningen in Copenhagen between 1916 and 1937, and together with Thorvald Larsen he exhibited at Bach's Kunsthandel in Copenhagen 1916-1917 and with Hans Knudsen in 1921. He participated in the exhibition "De Afviste fra Charlottenborg" 1905, the Glass Palace exhibition in Munich 1913, Baltic exhibition in Malmö 1914, Danish painting in Helsinki 1928 and Nordjysk Kunststævne in Aalborg 1933. His art consists of portraits and landscape paintings. Søeborg is represented in, among others, the Aalborg Museum and the Sønderborg Museum.